Module 1: Phonetics and Representations of Speech

Speech production involves three systems in the body: the respiratory system, the phonation system, and the articulation system (Figure 1.2). 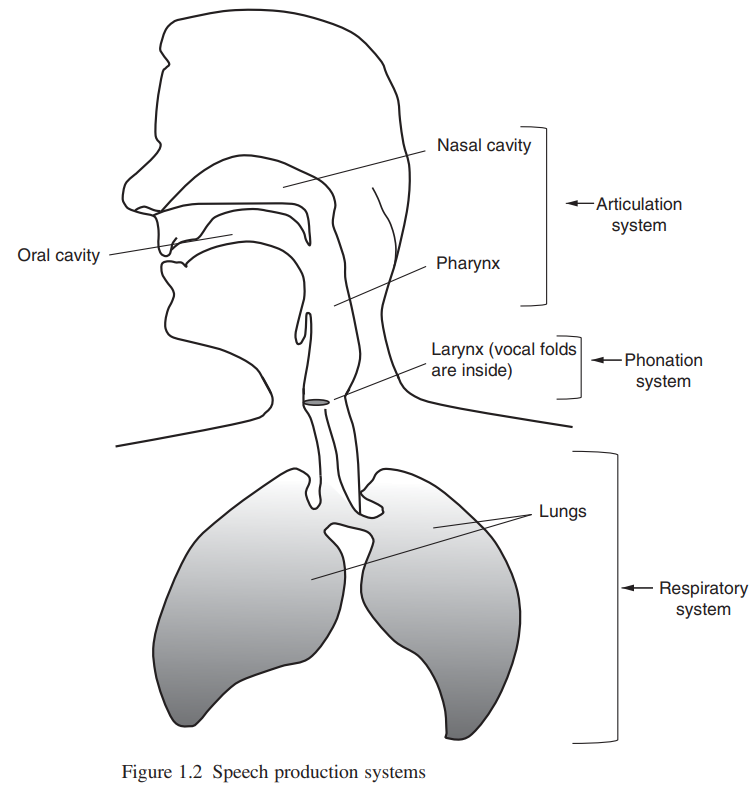 The respiratory system supplies the air needed to initiate speech sounds (see Figure 1.3). It consists of parts of the body that allow us to breathe, including the lungs, the diaphragm, the muscles of the rib cage, and the abdominal muscles.

The Articulation System: The Vocal Tract

Monophthong: A vowel produced with the same tongue position throughout the syllable that is perceived as having a single quality such as the <ee> vowel in English ‘bee’.

Diphthong: A vowel produced with tongue movement from one vowel to another within the same syllable, thus being perceived as having two qualities, such as the <uy> vowel in English ‘buy’.

Nasal vowels: Vowels produced with airflows through the nasal and the oral cavities to signal a meaning contrast with oral vowels, as in French <bon> ‘good’ vs. <beau> ‘beautiful’.

Module 2: Acoustics of Consonants and vowels

Resonance: The condition whereby vibrations of a physical body such as an object or an air column are amplified by an outside force of the same natural frequency (sympathetic vibration).

Q: Typically, telephones do not transmit any frequencies below 300Hz. What is the consequence on the listener’s perception of pitch, when the speaker has a fundamental frequency of 200Hz?

A: The perceived pitch will be 200Hz, corresponding to the pitch of the original speech. As we saw in class, even if we use a high pass filter to remove frequencies that include F0, we can (somewhat surprisingly) still perceive the original pitch. This is because the harmonic structure is still in the signal (i.e., multiples of the F0) and the brain can use this to reconstruct F0. (Module 4 Lecture discussion,
this is a stretch question!).